Where I live in the UK gives me access to miles of quiet country lanes, and the hilly landscape of the Peak District is within easy reach.  Although this area does not have the long climbs, like those found in the high mountains of Europe, it can be a really challenging place to ride, with lots of short, steep inclines. A day on the bike is both rewarding and exhausting

This route weaves its way through an area of the Peak District, known as White Peak where the landscape varies from steep sided valleys to open expanses of rolling hills, offering panoramic views of the Peak Park.

Much of my cycling is done with my partner, Emma. We both enjoy sharing the experience of the ride, and encourage each other when things don’t go as expected, or when the pedals become difficult to turn.  The ride is in excess of 160km, and best enjoyed when the weather is fair, and the days are long. Fortunately, good weather was forecast, so we decided to go for it.

We drive to our start point, near to the market town of Leek, and the route brings us back to where the car is parked, at the halfway point.   This is helpful for water and food supplies, but requires determination to continue after stopping!

The ride begins in quiet lanes that interweave across the area. The challenge of uphill gradient soon begins with a climb up to the village of Bradnop. This is the first of many; a sign indicating 16% gives a hint of what lies ahead.  This road has a false summit, tricking the rider into thinking they are near the top, then it rises up again. The true summit rewards with views across neighbouring counties. These places fuel my love for cycling, so I stop to take a few photos, to preserve memories of the day. 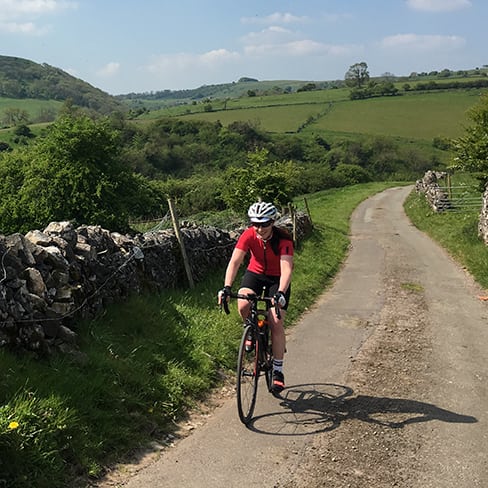 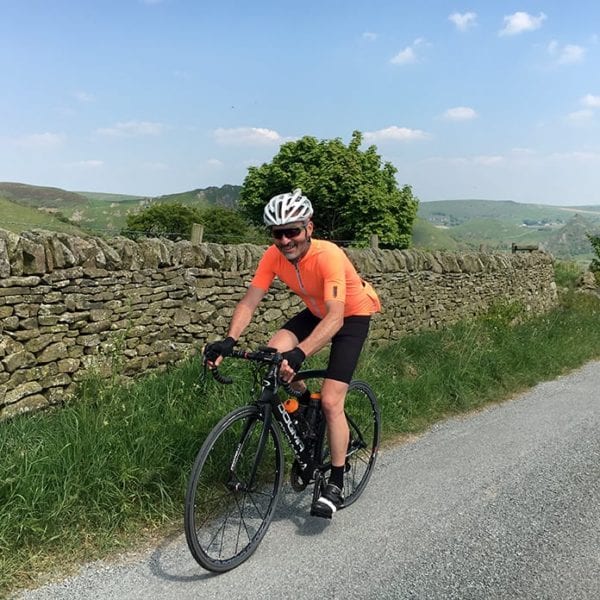 We continue through villages and rolling hillside to Grindon, a small village which edges a grassy valley.  The descent to the valley floor requires caution, as the road is narrow, pitted and littered with patches of sand and gravel.  The road surface as you climb out of the valley is similar, but gravity, a tight switchback and a cattle grid add to the character of the climb.

We continue onto Milldale, a renowned beauty spot. The road through the valley travels alongside the River Dove.  The water is clear, and it glistens intensely as it folds over the angular stones, that lie beneath the surface.

A sunny day will draw people to the Peak District, but today was the “Royal Wedding” in the UK, and the FA Cup final. This gifted us with quiet roads, Perfect!  Next came the climb to Longcliffe Quarry.  This is not as long as the climbs of the Dolomites or Pyrenees, but it has a constant gradient, with sweeping curves, so you can practice a smooth pedalling rhythm.  Riding the climb brought back fond memories of my first visit to this area. On that occasion, it was a group event, and riders were prompting each other to ride faster.  I recall my soaring heart rate and burning legs, but it was great fun.

The route takes us close to the small town of Bakewell, and the village of Youlgreave.  Here you can sample Bakewell Tart, a specialty from this area, which is also delicious ride fuel! There are shops and cafes, ideal for snacks and water.  We head through rolling countryside, towards Monyash. The hills are grassy and open, except for the occasional scattering of trees, stone walls, colourful flowers and rocky outcrops.   Monyash is popular with motorbikers and cyclists alike, the village green busy with people enjoying the sunshine.

A gradual climb and steady descent, takes us near to the High Peak trail, a former railway line, transformed into a family friendly cycle path.   At Crowdecote, the route meets the edge of a steep sided valley and the landscape begins to change, the scale of the hills becoming larger.  The view is superb, and we take a moment to enjoy the surroundings before descending to the valley base via some short, steep switchbacks.  After a quick shift of gears, I ease myself into the climb and admire the craggy hills, which serve as a distraction from the sensations in my legs.

Longnor comes next, a pretty village with a cobbled square.  Outside Cobbles Coffee Shop you will often see rows of bikes, and groups of riders enjoying coffee and cake.  The next challenge is up to Hollinsclough, a renowned climb locally, due to the brutally steep gradient, where a lot of height is gained over a relatively short distance…..very tough with lots of kilometres in the legs!  However, the delicious flapjack at Flash Bar Stores is something to look forward to, after tackling this climb!

After a short descent, we climb again, to a vantage point which offers views of where the Peak District hills begin, and reach into the distance. The landscape here has shades of green and brown, a mix of smooth short grass, textured heather, contrasting with rocky outcrops.

For me, being in these beautiful places creates a natural high, I ease my pace, taking time to admire, the scenery and for the memories to embed.  Emma soon arrives, we chat about the climb, and look towards the Roaches. These are rock formations; jagged shapes and steep cliffs. Their silhouette creates a stark contrast against the skyline.  They are well known landmark in this area.

It’s mid-afternoon by now, and the descent to where the car is parked is tight and technical, but traffic is infrequent.   The winter had limited our cycling, and our legs were feeling jaded with the unrelenting climbing.  Physically we were tired, but we were buzzing from 80km ridden so far, and we were determined to carry on.  After filling the pockets with energy bars and gels, and topping up the bottles, we continued again into the hills…..only another 85km to go! 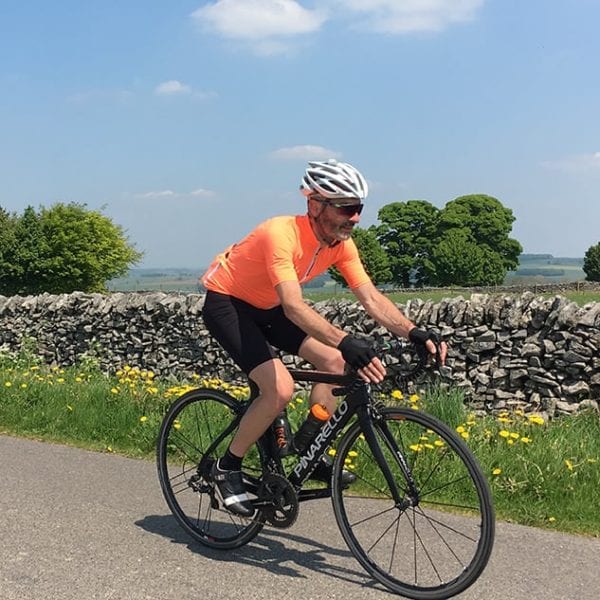 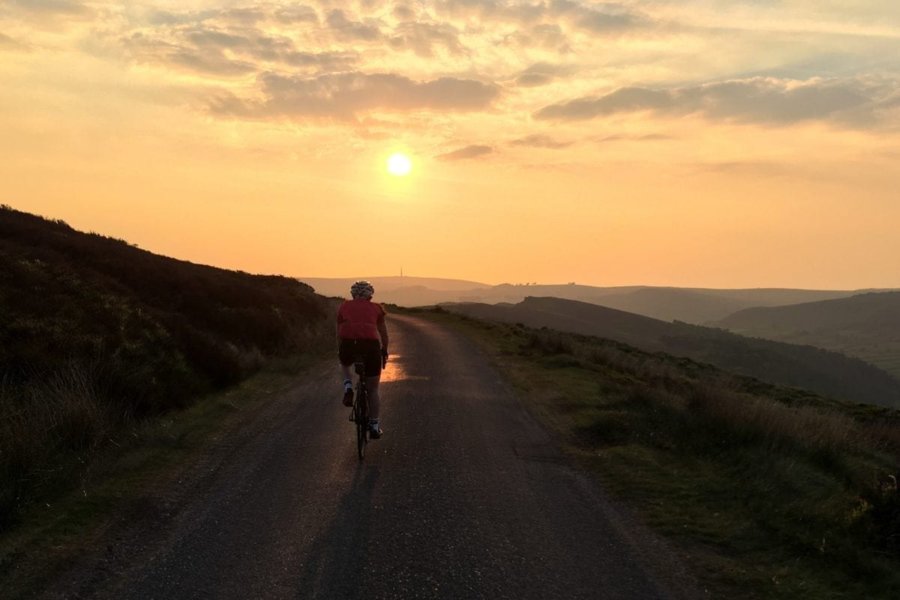 Within a few hundred metres we reached the base of Gunn Hill, a climb that has featured in the Tour of Britain, on a number of occasions.   The lower section is shrouded in trees, and a steep, ramped profile begins almost immediately.  My legs had cooled down after the stop, and the first minute or two felt really tough. Thankfully the numbness subsided, and the more open, upper slopes of Gunn Hill felt far less intimidating!

The views and heather covered hills continued to energise my enthusiasm, and I enjoyed the descent from Gunn, through to Wincle. This tiny place is home to a Brewery, a Pub, and a handful of houses.  Mature trees edge the valley.  It will be particularly beautiful in Autumn, when the greens turn to golden brown.

When riding this section of the route, Emma and I often chat about how challenging the next twenty kilometres feel, especially the next climb!  It is a discrete little lane, tucked away in the hillside, and it is barely wide enough for a single vehicle.  Stone walls edge both sides, creating a tunnel-like effect, and its summit only comes into sight a short distance from where the elevation ends.  We like to call it “The Tunnel of Terror”!

To limit the strain on my tiring muscles, I weaved up the ascent, moving out of the saddle when the gradient touched 20%.  On reaching the top, I waited to take a few photos of Emma on the climb. I really enjoy looking through the images that accumulate throughout the year, they prompt happy recollections, of days like this one.

A stepped descent leads us to the edge of Macclesfield Forest, a beautiful area in which mature woodland surround numerous lakes.  Riding along the tree-lined roads is such a contrast to the open hills, it is something I always looks forward to.  The passage through the forest concludes with a climb up to Standing Stone. Yet again, the gradients reach 20%, and I muster additional determination by reminding myself that after this section, there is no more climbing above 15%!

It was now early evening, the majority of people visiting the area had left, and the surrounding hills took on different appearance, as the intensity of the sunlight eased.  Both myself and Emma love being in the Peak District at this time of day, and although we were tiring, we were loving being out on our bikes.  A succession of gradual, longer climbs was all that remained, and the one known as The Brickworks was next.   The road eases its way up the hillside, giving panoramic views at the top.  Pym Chair and Windgather Rocks can be seen in the distance, and that is our next destination.

The descent off The Brickworks can be fast and fun, but I tend to brush off a touch of speed, in case the shadows conceal a pothole or the damp, pitted surface.  On entering Kettleshulme, a tiny lane on the right marks the beginning of the ascent to Pym Chair.  Emma and I offer each other a few words of encouragement, before heading uphill again.

The pitch of the narrow road varies, and I use the top two gears to sustain constant rhythm in my legs and breathing. The length of the climb, and surrounding landscape prompt fond memories of cycling in the Pyrenees, and I lose myself in the moment, until the road meets another, indicating the summit.

Emma joins me soon after, and we admire the scene, take a few photos, before descending to the Goyt Valley.  From a personal perspective, the climb out of this valley is one of my favourite sections of road in the UK. It is tree lined to start, then it gradually changes to open hills, and views of the river combine to make this a special place.

At the head of the valley, we pick up a rolling descent. The combination of momentum, sweeping bends, and the beauty of the low sun pass all too quickly, and I was soon turning onto the penultimate climb.  I caught sight of Emma, so I knew all was okay, and the closing kilometres of our challenge could begin.

This area of the Peak District sits just below Flash, the highest village in England, and is also home to a llama farm. The llamas like to peer over the wall as we pass, and their quirky appearance adds a twist to the usual sheep and cattle that you see when riding.  We reached the final climb in fading light; riding side by side, it was fabulous to view the silhouette of the hills and rock, magnificent in the orange sunset.

The scene across the valley was stunning, but the diminishing light only allowed a few moments before it was necessary to head downhill, to finish the ride.  The gradient flattened, and we free- wheeled to the car, both buzzing from the natural high you experience when completing a big challenge.  We were both exhausted, but neither of us wanted the day to end!   With 165km and almost 4200 metres of ascent logged, it was certainly a tough day in the saddle.   If you are looking for a hilly challenge ride, then check out our route, you can find it on Emma’s Strava account (search for athlete name “Amme Gnat”, and “Peak District Century” ride).